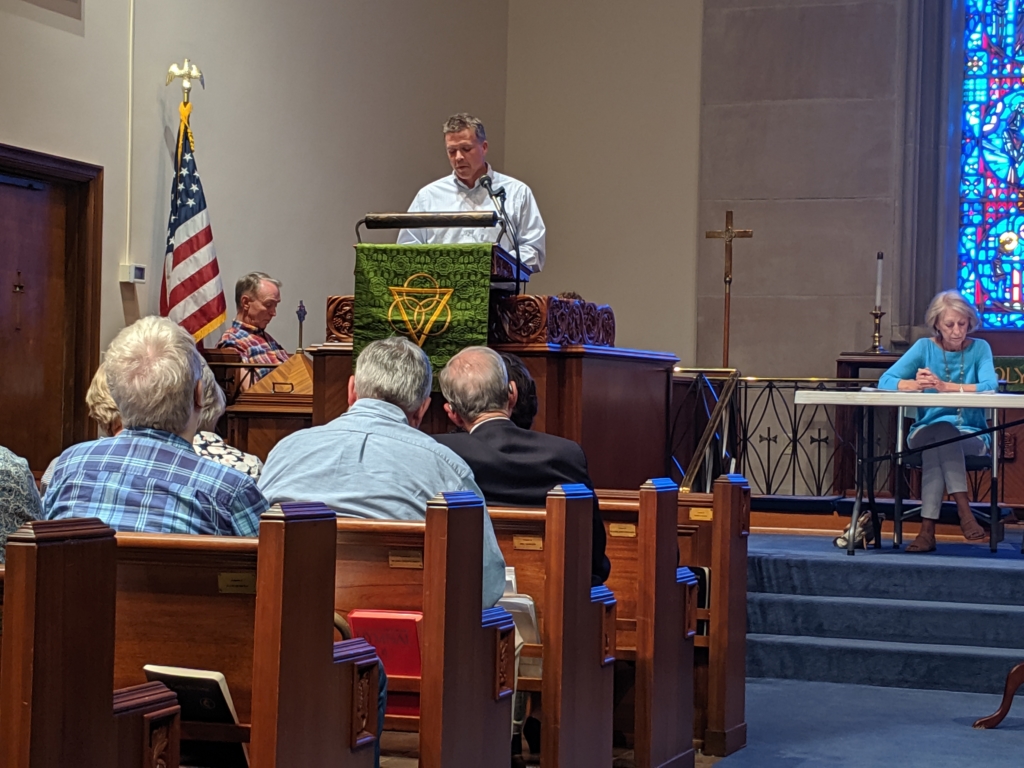 Ricky Rowe addresses Church Council prior to the historic vote.

Washington Street United Methodist Church (WSUMC) announces that on Monday, July 29, after a unanimous vote, its Church Council approved a recommendation made by the Discernment Implementation Team (DIT) to join the Reconciling Ministries Network (RMN). This makes Washington Street the only Reconciling church in the South Carolina United Methodist Conference. The RMN is a nonprofit Christian network of over 40,000 Reconciling United Methodists and over 1,000 Reconciling Churches and Communities that promote the full inclusion of LGBTQIA individuals in the life of the church. Its mission is “Living into our shared baptismal covenant, Reconciling Ministries Network equips and mobilizes United Methodists to resist evil, injustice, and oppression as we seek justice for people of all sexual orientations and gender identities.”

In February of 2019 the United Methodist General Conference passed the “Traditional Plan” which maintains the current Book of Discipline, the United Methodist policy book, that says the practice of homosexuality “is incompatible with Christian teaching,” and bars “self-avowed practicing homosexuals” from ordination. The legislation also prohibits United Methodist clergy from officiating same-sex marriages, while also strengthening enforcement measures for violating prohibitions.

Some members of the congregation of WSUMC were disappointed with the Conference’s decisions and took steps to lead the way forward to become a Reconciling congregation. In response, Church Council issued a bold response statement, and affirmed its identity statement which was adopted in 2016:

“The congregation of WSUMC praises and serves God from the heart of the city in ways which reach our neighbors near and far. We welcome all who seek the love and mercy of Christ regardless of race, creed, age, gender, national origin, sexual orientation, gender identity, or economic status. We honor traditions as rooted in our history, our expression of worship, and our respect for theological curiosity. We nonetheless see vital change and ongoing renewal as essential for spiritual growth.”

Church Council also commissioned the formation of a General Conference Response Team (GCRT) who were to “explore whether to become a Reconciling Church and support the promotion of activities to maintain a healthy level of conversation on the subject within our congregation.” The GCRT spent six weeks researching and discussing WSUMC’s affiliation with the Reconciling Ministries Network (RMN).

On May 22, 2019, the GCRT presented to Church Council recommendations for a comprehensive discernment, education and information process for WSUMC to follow in pursuit of becoming a Reconciling Church. The discernment process recommended was modeled after a similar process conducted at First Baptist Church of Greenville (FBCG) and was chosen because it was designed to bring consensus within the congregation and allow for all viewpoints to be shared via different avenues. FBCG’s process was customized by the GCRT to meet WSUMC’s unique needs, based on its history, congregational readiness, core values, and existing identity statement. A Discernment Implementation Team (DIT) was then formed to oversee the implementation of this process adopted by Church Council.

On Monday, July 29 the Church Council made their historic decision and WSUMC will move forward solidifying their relationship with RMN.

“Washington Street has been living out her welcome and affirmation of all people for over a decade,” said Pastor Patricia Parrish. “This affiliation with Reconciling Ministries Network does not change who we are, but is a public declaration of our deep desire for change in The Book of Discipline and our commitment to seek the change we desire.”