Our Historic Sanctuary is the Heart of Our Church Home 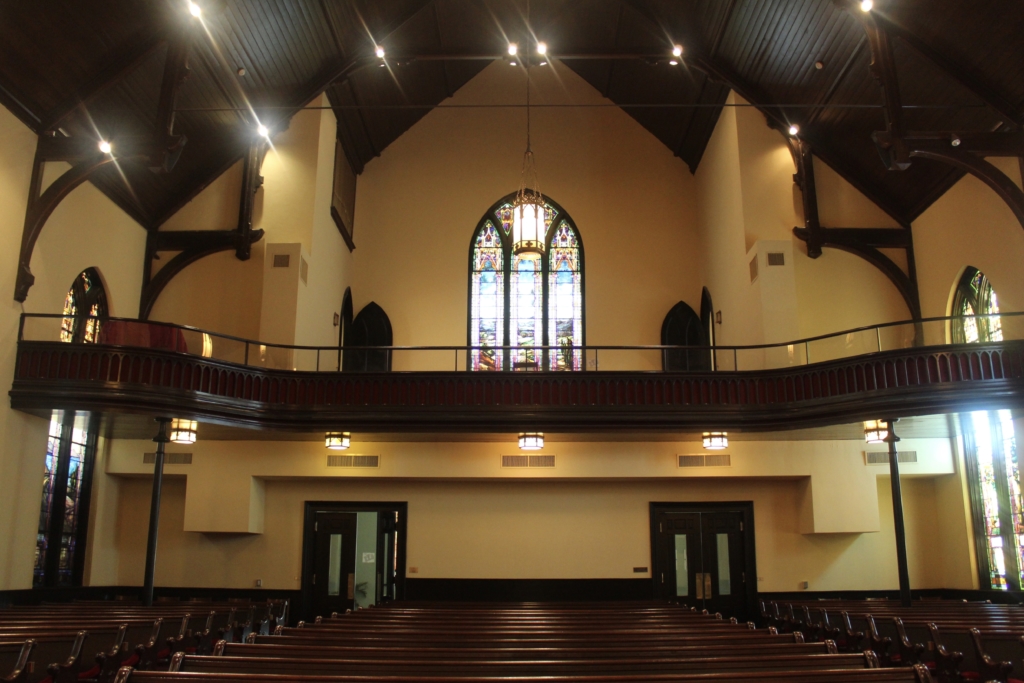 The architecture of the sanctuary is gothic Revival. The stained glass windows along the sides portray the life of Christ as landscapes with no human figures. There were ordered in 1912-13 and were dedicated on Easter Sunday in 1914.

The themes of the ten stained glass windows beginning with the window east of the altar and continuing clockwise are:

The center window above the choir loft was the first stained glass window in the church and was dedicated in 1900 to Rev. William Martin, who traveled throughout the North and South collecting funds to rebuild the church, which was burned at the end of the Civil War. The center window in the choir loft is flanked by two windows containing angel figures installed in the early 1920’s.

Looking up toward the balcony, the large window depicts Christ weeping over Jerusalem. It was dedicated to the memory of John Harper, the founder of Washington Street United Methodist Church.

The chancel has a dais constructed of black walnut where the pulpit stands. Below the pulpit is the altar with the communion table. Bishop William Capers, beloved former minister of the church is buried under the pulpit. He was the founder of the Mission to Slaves and was a missionary to the Creek Indians. Two stately high-backed cathedral chairs in the altar were given Mrs. John S. Preston in memory of her mother, Mrs. Wade Hampton I.

The E.M. Skinner pipe organ was installed in 1920, modernized in 2008, and dedicated to Ralph R. Rozier, Organist Emeritus of the church.